There’s no doubt that Alzheimer’s disease (AD) is terrifying. In the United States, it is second only to cancer as the most feared health condition.1 However, the brain benefits of coconut oil offer hope!

The Basic Facts about Alzheimer’s Disease

According to the National Institute on Aging, “Alzheimer’s disease is an irreversible, progressive brain disorder that slowly destroys memory and thinking skills and, eventually, the ability to carry out the simplest tasks.”2

AD is the most common form of dementia. Most cases are diagnosed in people over the age of 60, but for some it can begin as early as the 30s. This is known as early-onset Alzheimer’s.3

The earliest symptoms can be easy to dismiss…confusion and mild forgetfulness. The progression of AD is different for every case. While some may gradually worsen, others can experience a much faster deterioration. Over time, brain function becomes impaired to the point that it cannot be ignored and becomes obvious to the people around you.

Losing the memories of who you are and the people who have been part of your life can make those with AD feel trapped in a prison of their own mind.

Recent memories are the first to go and as the disease progresses, more years are swallowed up in the abyss. Childhood memories and learned information are the last to be robbed from the mind of a patient with Alzheimer’s disease, leaving them helpless and confused.

It is agonizing for the AD patient and for those friends and family who are slowly erased from the mind of the person they love.

However, there are ways to slow – and possibly even prevent – the progression of Alzheimer’s disease. The secret lies in the healing brain benefits of coconut oil and the nature of ketones. 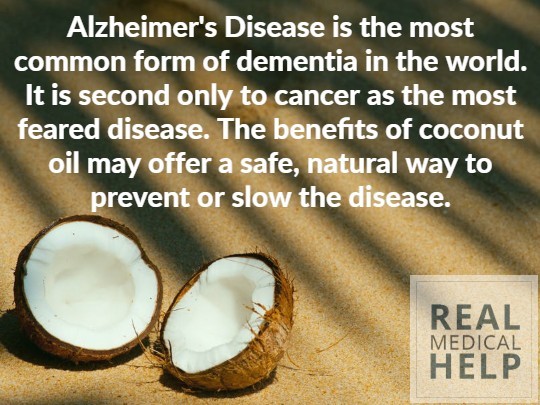 According to neurologist Dr. David Perlmutter, author of Grain Brain, it is the flawed U.S. nutritional food pyramid (11 servings of grain daily), the over-consumption of wheat, and the removal of fat in American diets that are the root cause of the Alzheimer’s pandemic.

Researchers at MIT concluded, “An excess of dietary carbohydrates, particularly fructose, alongside a relative deficiency in dietary fats and cholesterol, may lead to the development of Alzheimer's disease. Over time, a cascade response leads to impaired glutamate signaling, increased oxidative damage, mitochondrial and lysosomal dysfunction, increased risk to microbial infection, and, ultimately, apoptosis [brain cell death].”9

One effect of Alzheimer’s is the brain’s inability to process the primary fuel of blood sugar or glucose to produce energy. As a result, the brain is deprived of the energy it requires to repair brain cells and stimulate the growth of new cells. Glucose is the primary source of energy and if your brain can’t process it, an alternative fuel is needed or the cells begin to atrophy. This is what leads to brain cell death.

Ketones are a special type of high-energy fuel created by the liver when the body burns through its’ fat stores. When glucose levels drop, the body steps in and increases ketone production as an alternative to glucose. The problem is that ketone production only increases when carbohydrate intake is very low.

If you switch to consuming primarily proteins and fats, then your body can produce all the nutrients needed from ketones. This type of diet is known as a ketogenic diet (such as South Beach or other similar eating plans). However, total daily carbohydrate intake must remain at or below 2% for it to work. That means over 90% of your calories need to come from fat.

Studies from The John M. Freeman Pediatric Epilepsy Center, Johns Hopkins Hospital, Baltimore, Maryland published in 2006 on the neuroprotective and disease-modifying effects of the ketogenic diet have rocked the medical community. Researchers raised the possibility that the ketogenic diet could be disease transforming for those suffering from Alzheimer’s.10

Ketogenic diets have been effectively used to treat epilepsy for over 90 years. Using it to treat other diseases isn’t a long reach. On the other hand, keeping carbohydrate consumption below the recommended 2% can be a massive struggle (to say the least).

The Brain Benefits of Coconut Oil and Non-Restrictive Ketones!

The saturated fat in coconut oil is composed of 65% medium-chain triglycerides (MCTs). What makes MCTs so special is that when they are ingested, they are rapidly absorbed and converted into ketones regardless of blood glucose levels or the amount carbohydrates present in the diet.

Simply stated, coconut oil provides ketone bodies for fuel that the brain can use quickly no matter what the rest of your diet looks like!

A trailblazing study published in the journal Neurobiology of Aging found that the administration of medium-chain triglycerides (MCTs), the primary fat in coconut oil, almost instantly improved cognitive performance in older adults suffering from memory loss, dementia, and even Alzheimer’s. The improvement didn’t happen after weeks or months of treatment, but after a single 40 ml dose (about 3 US tablespoons).11

Almost 20 subjects with diagnosed Alzheimer’s disease or other forms of mild cognitive impairment were given either emulsified MCTs or a placebo. The researchers noted a significant increase in blood plasma levels of the ketone body beta-Hydroxybutyric acid (beta-OHB) after only 90 minutes of treatment

Studies in neurobiological science advise that ketone bodies such as beta-OHB are indeed an effective and more efficient energy alternative for the brain when blood glucose is low. This energy is needed for nerve cell survival and for synaptic activity, which is the basis of learning and memory.

MCTS are more rapidly absorbed by the body and more quickly burned as fuel instead of being stored as fat. Coconut oil ketone bodies are a very simple alternative to glucose that the body can use for fuel. The liver metabolizes ketone bodies immediately and your brain can immediately use it for fuel.

In patent applications for MCT oil (a derivative of coconut oil) over 47% of participants tested showed remarkable improvement in their cognitive (memory) scores after just one dose!

There are many uses and benefits to adding this nutritious oil to your diet but the brain benefits of coconut oil are one of the most incredible. There have been well over 10,000 studies done on this whole food and there are excellent reasons why.

Add a couple of tablespoons to your morning smoothie, use it in your homemade salad dressing, mix it with herbs for a dipping sauce to eat with crusty bread. The possibilities and positive aspects of coconut oil are endless…and it’s a well-tolerated food for everyone who isn’t allergic to coconuts.

The Vitamin To Slow Aging Naturally

It’s considered a “media darling” because Vitamin C is one of the most popular and widely used vitamins in the world. Also known as ascorbic acid, it is the most readily available vitamin and there are good reasons it is the most widely purchased supplement worldwide. Many people might not realize how effectively you can slow aging naturally ...