You’ve probably read a lot about the benefits of coconut oil over the last few years. It has so many great (and effective) uses for you, your pets, and your environment. As long as you’re not allergic to coconuts, coconut oil has even been proven safe for use on infants and the very ill.

Externally, it’s a fantastic moisturizer and conditioner for your skin, hair, and nails. It’s a low-level natural sunscreen (4-6 SPF) that keeps your skin from drying out if you spend a lot of time outside. Internally, it’s amazing for digestion and overall nutrition because of its unique fatty acid content. It can help with fat-burning and appetite control so is a great addition to a weight control lifestyle. Coconut oil is naturally antimicrobial, antibacterial, and antifungal.

One of the most fascinating (and truly incredible) discoveries about this ancient remedy is the effect coconut oil benefits the human brain. Considering the explosion of dementia worldwide over the past few decades, everything you can do to protect your brain is vital!

According to Alzheimer’s Disease International, someone in the world develops dementia every 3 seconds. In the time it took you to read that last sentence, dementia claimed another victim.1

Globally, more than 47 million people are living with dementia right now, but experts are uncertain about the number of undiagnosed patients. Scientists project that dementia will almost double every two decades per research gathered by the World Health Organization (WHO).2

Most cases are diagnosed in men and women over the age of 60 but 2.5 million people have what is called early-onset Alzheimer’s.

Surveys have found that Americans fear Alzheimer’s disease more than every other disease but cancer. Losing one’s memories, experiences, and sense of self is more terrifying than heart disease, stroke, or diabetes – even though each of those diseases claim more lives annually than the most common type of dementia.3

Even though Alzheimer’s is the sixth leading cause of death in the United States, it’s the only killer in the top 10 that is considered not preventable or curable by the medical community. In fact, the standard position on dementia among doctors and drug companies is that there isn’t even a way to slow the disease down.

WHO describes dementia as a syndrome in which there is deterioration in memory, thinking, behavior, and the ability to perform everyday activities. Although dementia mainly affects older people, it is not a normal part of aging.4

If diseases such as Alzheimer’s aren’t a normal part of aging, there must be a root cause and there must be ways to prevent it, slow it down, and/or reverse it.

Granted, the mainstream medical and scientific communities haven’t discovered (and patented) the “cure” for dementia yet. Once they do, they’ll make sure every diagnosed patient has their prescription. In the meantime, what are patients (and their families) who are suffering from this disease supposed to do? Simply wait to see what happens?

Their insistence that nothing works to prevent or slow down the disease because they haven’t found a profitable drug solution yet is infuriating.

Some risk factors – such as age, genetics, gender (women have a higher risk than men), family history, and traumatic brain injury – are not possible to control.

Others certainly are within your power to change!5

In every major disease, poor diet is listed as a primary risk factor. However, what constitutes a “healthy diet” is up for intense debate.

One of the most astounding directions of the mainstream medical community in the past forty years is their insistence on following a low-fat eating plan.

With the help of food manufacturers in the late 1970s, the American diet was essentially stripped of all healthy fats (butter, eggs, coconut oil) and replaced them with toxic garbage like margarine and hydrogenated vegetable oils. 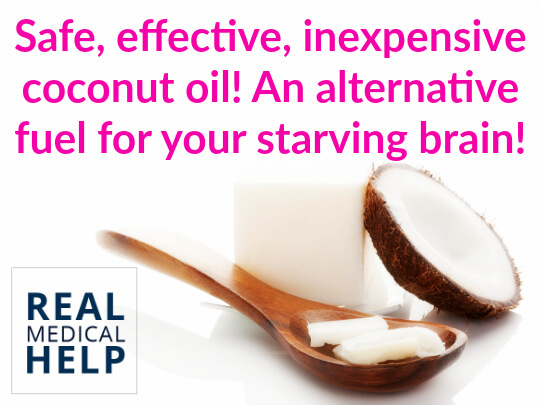 They justified this by saying it was a better way to control weight and would get rid of heart disease. Now, several decades later, we have more heart disease than ever and two-thirds of American adults are overweight and obese.

Not to mention...your brain is starving to death!

Why Use Coconut Oil Benefits to Protect Your Brain?

Recent studies have uncovered that both fat and cholesterol are severely deficient in the Alzheimer’s brain. These are crucial brain nutrients. Your brain represents only 2% of the body’s total mass but utilizes 25% of the total cholesterol.

Cholesterol and fat are essential to transmit nerve signals and fight off infections.

Your brain needs fuel to repair brain cells and stimulate the growth of new cells. Glucose is the primary source of energy that is used. However, patients with AD struggle to process glucose, which leaves them without a fuel source.

An alternative fuel is needed or the cells begin to atrophy.

This is where ketones can bridge the gap. Ketones are a special type of high-energy fuel created by the liver when the body burns through its fat stores. When glucose levels drop, the body steps in and increases ketone production as an alternative to glucose.

The problem is that ketone production only increases when carbohydrate intake is very low. Total daily carb intake must remain at or below 2% for these diets to stimulate ketones. Over 90% of your calories need to come from fat and protein. This way of eating can be incredibly difficult to stick to long-term and can result in other issues over time.

The saturated fat in coconut oil is composed of 65% medium-chain triglycerides (MCTs).

What makes MCTs so special is that when they are ingested, they are rapidly absorbed and converted into ketones regardless of blood glucose levels or the amount of carbohydrates present in the diet.7 In other words, ketone bodies can fuel your brain quickly and efficiently no matter what the rest of your diet looks like!

A study published in the Neurobiology of Aging journal found that the administration of medium-chain triglycerides (MCTs), the primary fat in coconut oil, almost instantly improved cognitive performance in older adults suffering from memory loss, dementia, and even Alzheimer’s.

The improvement didn’t happen after weeks or months of treatment, but after a single 40 ml dose (about 3 US tablespoons)! The researchers noted a significant increase in blood plasma levels of the ketone body beta-Hydroxybutyric acid (beta-OHB) after only 90 minutes of treatment.8

Studies in neurobiological science advise that ketone bodies such as beta-OHB are indeed an effective and more efficient energy alternative for the brain when blood glucose is low. This energy is needed for nerve cell survival and for synaptic activity, which is the basis of learning and memory.

MCTs are more rapidly absorbed by the body and more quickly burned as fuel instead of long-chain fatty acids (or LCFAs) stored as fat. Ketone bodies found in MCT and coconut oil are a very simple alternative to glucose that your body can use for fuel. The liver metabolizes ketone bodies immediately and your brain can use it right away for necessary power.

How Much Should You Take?

A total of 5 tablespoons (75 grams) of coconut oil a day taken with meals is recommended. It’s best to consult with your doctor or health practitioner, especially for treatment purposes since each person’s case is unique.

You can add a portion of the coconut oil to each of the three meals you consume during the day. It takes approximately three hours for your body to process the coconut oil and the benefits to begin to take effect.

There are no side effects of coconut oil if you’re not allergic to coconuts. However, give your body a chance to adjust by starting slowly and building up your consumption. If you start too quickly with too much, some people report “loose” bowels, nausea, or a bit of gas.

Look for unrefined extra-virgin organic coconut oil to make sure you’re not getting over-processed junk. It’s inexpensive and easy to find even in big box stores.

To get the maximum effect of the benefits of coconut oil, alternate the fast-acting MCT oil with the long-lasting coconut oil (that contains lauric acid naturally).

Traditional drugs to treat the symptoms of this devastating and debilitating disease don’t help every patient and their conditions can continue to decline rapidly.

If even one Alzheimer’s patient is helped with this harmless, inexpensive treatment – if their daily lives are improved even slightly – is that not worth giving the benefits of coconut oil a try?

Dangers of Mineral Oil -Not Good For Your Skin

Benefits of Water Makes it Your Best Health Drink

When was the last time you ate cabbage? I know, I know...it’s not a fancy food. In fact, it has such a reputation for being an unwanted veggie that the awesome benefits of cabbage have pretty much been forgotten or ignored!Part of the cruciferous family (like kale and spinach), cabbage is one of the cheapest, easiest, and most effective health ...