The Bizarre (and Effective) Benefits of Auriculotherapy

You might have heard about the incredible benefits of the ancient practice of acupuncture. These health benefits have been proven by science repeatedly.

In this article, we’re going to focus specifically on the possible benefits of auriculotherapy – something that’s often referred to as acupuncture for the ear.

Like many Complementary and Alternative Medicine (CAM) modalities, auriculotherapy practitioners may overstate what the technique can accomplish. Proponents claim it can ease chronic pain, alleviate allergies, improve digestion, and balance mood disorders such as anxiety and depression. These actually have basis in scientific fact that has been replicated.

Some of the claims that auriculotherapy can cure everything from poor vision to weight loss to diabetes to smoking cessation are what lead to confusion and outright disbelief on the part of the medical community and consumers.

Let’s cut through the hype and find out how effective this natural technique really is.

Over the past six decades, auriculotherapy has established itself as a separate branch of acupuncture. The practice of acupuncture has been around for thousands of years. It holds a prominent place in Traditional Chinese Medicine (TCM) as well as other ancient civilizations.

However, it’s only in the past few years that the medical community has taken acupuncture seriously. Acupuncture’s ability to relieve pain through pressure points is well documented and its effectiveness in easing the brutal side effects of conventional cancer therapies is also scientifically proven.

When the American Cancer Society mentions an alternative or complementary modality in a positive light, you know the perception has changed.1 These days, many cancer treatment centers offer acupuncture effectively to ease the fatigue, pain, nausea, and other side effects associated with chemotherapy and radiation therapy.

Researchers with the University of North Carolina – Chapel Hill describe the acupuncture of the ear technique in their study, “[Auriculotherapy] is based on a set of anatomical maps superimposed onto the ear. Stimulating a point on the map is proposed to affect the gross anatomical organ associated with that point.”2

Perhaps the most well-known benefit of auriculotherapy is in the treatment of both acute and chronic pain. In the UNC-Chapel Hill study, researchers reviewed seventeen studies focused on auriculotherapy and pain relief.

They discovered that the CAM practice showed efficacy in easing acute pain, chronic pain, pain intensity, and resulted in a lower use of pain-relievers (over-the-counter and pharmaceutical).

The researchers state in their conclusion, “Pain affects more Americans than diabetes, heart disease, and cancer combined, and accounts for more than 20% of medical visits and 10% of prescription drug sales.

Auriculotherapy may be effective for the treatment of a variety of types of pain, especially postoperative pain.”3 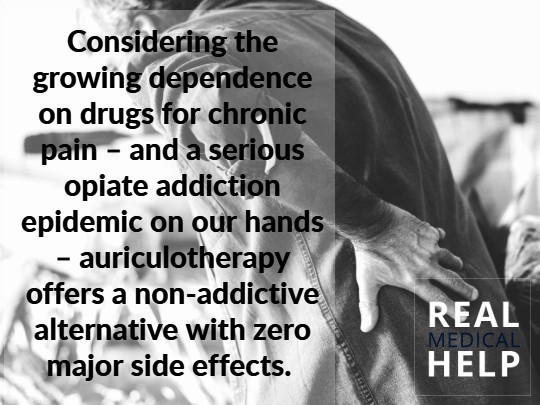 Considering the growing dependence on drugs for chronic pain – to the level that we have a serious opiate addiction epidemic – auriculotherapy offers a non-addictive alternate that has zero major side effects.

As with most CAM therapies, larger trials are needed to get such techniques into the mainstream medical community. However, if you suffer from chronic pain, there could be some relief with a practitioner of ancient remedies that are worth checking out.

The Placebo Effect Gets a Bad Rap

Acupuncture, acupressure, and auriculotherapy all focus on specific pressure points within the human body. While there are many health claims made about all three modalities, some have been proven to be the result of the placebo effect.

This is the mind-over-matter effect where your mind believes in whatever treatment is being administered so strongly that it convinces your physical body that it feels better.

The mind-body connection is fascinating stuff and it’s been known to confuse scientists working to prove the efficacy of a pharmaceutical drug. In some ways, I think this phenomenon is overlooked as a valid form of therapy more often than not.

A perfect example of this is a human trial published in the Journal of the American Board of Family Medicine in 2013. The researchers were trying to establish the effectiveness of auriculotherapy on smoking cessation and I find wonderful irony in their conclusions because of what they stated as the study results:

In other words, participants of this study received either auriculotherapy once a week for 5 weeks or “pretend” auriculotherapy. At the end of that time, a combined total of 38.8% (48 of the 125 veterans involved in the research) no longer smoked.

Mind over matter. In this case, auriculotherapy benefits didn’t seem very effective but for almost 40% of those former smokers…it worked anyway because their brains were convinced it would work.

Such as the effect meditation has on headaches. Sure, from the outside, it seems that you’re “willing yourself” not to feel pain but from a logical perspective, many headaches are likely caused by stress. The simple act of meditation slows you down enough to relieve the pressure, ease any anxiety of that moment, thus relieving the pain.

The Human Mind is a Powerful Thing.

Auriculotherapy is safe for people of all age groups and there are no side effects that should cause you concern. You can find an auriculotherapy ear map online and use the tip of a closed pen to experiment with the phenomenon yourself.

If you suffer from chronic pain, think about finding a practitioner near you.

Whether at an office or in your own home, auriculotherapy benefits are easy to test, simple to achieve, and effective in ways similar to acupuncture if not to the level that alternative health sites state.

Are Grains Causing Your Chronic Pain?

Can Eating Sugary Foods Increase Your Risk of Lung Cancer?You might think cigarettes (and second-hand smoke) are the only things that impact the health of your lungs. However, just because you don’t smoke, doesn’t mean you’re off the hook. Keeping lungs healthy is about more than tobacco!A poor diet and other lifestyle habits can substantially ...