The Danger of Factory Farmed Meat and Dairy

In an age where we are seeing more and more cases of antibiotic-resistant infections, limiting your exposure to the few antibiotics we have is critical. Multiple studies have found that factory-farmed meat is playing a large role in this growing epidemic.

What is Antibiotic Resistance?

This happens when bacteria, virus, fungus, or parasite survives treatment of standard drugs used to treat them in the past. It’s an evolutionary process that we’re fueling to happen unnaturally.

Germs treated efficiently with antibiotics at one point have now mutated. Over time, they’ve developed an immunity to the conventional antibiotics that used to kill them without fail. Worse, they are capable of passing on this immunity to future germ generations.

Over the last decade, some diseases that were once manageable are now increasingly resistant to the only antibiotic options we have to treat them.

There was a time that most infection-causing bacteria (urinary tract infections (UTIs), pneumonia, diarrhea, and skin or blood infections) were easily treatable. Now that some of the most common bacterial strains are drug-resistant, it changes everything.

Annually, at least 2 million people in the United States are infected with bacteria that are resistant to antibiotics and at least 23,000 people die from these infections. Over time, this problem will continue to grow and many more will die from complications by an antibiotic-resistant infection.

The CDC explains, “Antibiotic resistance is one of the world’s most pressing public health problems. Illnesses that were once easily treatable with antibiotics are becoming more difficult to cure and more expensive to treat.”2

The use of antibiotics is the single most important factor leading to antibiotic resistance around the world. Antibiotics are among the most commonly prescribed drugs used in human medicine. As much as 50% of all the antibiotics prescribed are not needed or optimally effective. Antibiotics are also commonly used for promoting growth in food animals, one type of use that is not necessary.3

The Problem Is Growing Rapidly…and Will Get Worse

In 2016, almost half a million cases of multi-drug resistant tuberculosis (TB) were diagnosed.4 This is an infection that has been under control for the most part since the 1920s.5 There are growing concerns about the treatment effectiveness regarding malaria and HIV as well.

This is not a small problem. 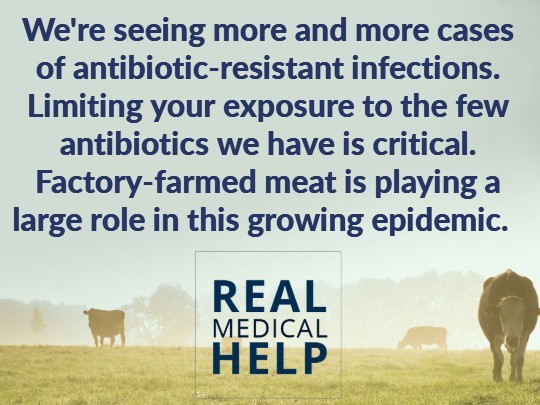 Factory-farmed meat is fueling antibiotic resistance in mankind. In the past few years, the extent of “dosing” occurring within our meat and dairy supply has finally seen the light of day.

Researchers with the Ohio State University stated in their review of antibiotic use in factory-farmed meat and dairy, “It is now critical that agricultural use of antibiotics be recognized as one of the major contributors to the development of resistant organisms that result in life-threatening human infections and included as part of the strategy to control the mounting public health crisis of antibiotic resistance.”6

Investigators in a piece from Frontline (PBS) article titled Is Your Meat Safe explained, “Ranchers and farmers have been feeding antibiotics to the animals we eat since they discovered decades ago that small doses of antibiotics administered daily would make most animals gain as much as 3 percent more weight than they otherwise would.”7

What’s fascinating is that the people who raise the food and the organizations who are supposed to monitor them don’t release how much antibiotics are being used. As we’ve learned in many cases, even trace amounts of some substances can be dangerous over time. How much we’re using as a nation is clear. The U.S. has less than 5% of total world population but represent 46% of global antibiotic use.

Let’s look at this from another angle…

If you or your child were prescribed to receive a “small dose of antibiotic daily” by your doctor, would you agree to the treatment? What do you think would be the result of daily antibiotic use? A person would have to be overwhelmingly uninformed to accept such a thing.

Yet, in the majority of households in the United States, factory-farmed meat or dairy products are consumed in at least one meal per day. That provides a “small dose” you didn’t plan on or agree to.

More from Frontline, “Concern about the growing level of drug-resistant bacteria has led to the banning of sub-therapeutic use of antibiotics in meat animals in many countries. In the United States, however, such use is still legal.”

After waiting far too long to speak up, the scientific and medical communities are recognizing the long-term effects of our global dependence on antibiotics. While making sure you don’t ask for (or receive) antibiotics unnecessarily and limiting use of “antibacterial” products, you cannot overlook the un-prescribed antibiotics administered to the factory-farmed meat you eat.

When it comes to factory-farmed meat and dairy, the problem needs a solution. New antibiotics would be one place to start. To that end, you probably think the Food and Drug Administration (FDA) has guidelines in place to make this happen. You would be wrong.

Scientists have difficulty obtaining permission to conduct new drug trials for antibiotics. That means they can’t be brought to market. There isn’t much profit in antibiotic manufacture (the real cash is antidepressants and cholesterol medications).

This Is a Problem That Affects All of Us

Annually, 5-10% of patients (1.7 million cases annually) are diagnosed with a hospital-acquired infection (HAI) according to the National Institutes of Health. Over two decades, the deaths from these infections jumped from 13,000 per year (1992) to 99,000 per year (2013).

The bugs are gaining ground and the drugs aren’t being developed to fight them. That means you have to go above and beyond to limit antibiotic use in your daily life.

3 Ways to Cut Back on Antibiotics

To stop this increasingly dangerous problem, you have to know about it and make stopping it in your own life (and the lives of your kids) a priority.

Antibiotic resistance is already an epidemic. How big it gets depends on all of us.

Hormone replacement therapy (HRT) is a strongly debated topic among women and their healthcare professionals. Before you fill that prescription, it’s important to know all the facts so you can make an informed decision.Women deal with three phases of physical and hormonal changes after approximately age forty that can leave them feeling exhausted, ...