The Dangers of Soy? Should You Worry About Them?

Reduce, reuse, and recycle. It’s something we all try to do. Being conscious of the environment and the world you live in is almost second nature to many of us as being conscious of your health and your body.

You drop your paper and plastic into the recycling bin.  Those with gardens compost the green leftovers from their kitchen.  You frequently consume re-manufactured industrial waste as part of what you assume to be a healthy diet.

Wait…what?  You didn’t see that on the label?

No, you didn’t…because it isn’t there.

The proteins of the very first plant listed in the US Food and Drug Administration’s (FDA) Poisonous Plant Database is one that is referenced 288 times in that single document.

In fact, subsidized by the government, it is used as a food additive more than any other ingredient.  This is despite the fact that the FDA refused to grant it “Generally Recognized as Safe” status.

The plant we’re talking about is the soybean.

Hold on a second!  Soy is supposed to be good for you!  People in Asian cultures have been eating it for thousands of years and it’s been proven to benefit their health.  Right?

Not exactly.  Research shows that soy products consumed in many Asian diets – such as tempeh, miso, soy sauce, and Kombucha tea – use fermented soy in production.

The majority of soy products sold in the United States – such as soymilk, tofu, burgers, and cheese – use unfermented soy in manufacturing.

The difference between fermented and unfermented soy is crucial.  The dangers of soy are serious.  Far more serious than you may realize.1

Let’s begin with the point many people are introduced to soy: soon after birth. On average, 12% of American children consume a baby formula containing soy. It’s dropped more than 50% in the last decade now that the word is out on soy (this is good news).2

What the label on those cans neglects to mention (even now) is that the product contains phytoestrogens.  These are plant-based compounds that mimic the estrogen produced by the human body.  A child fed soy-based formula is consuming something that mimics birth control. 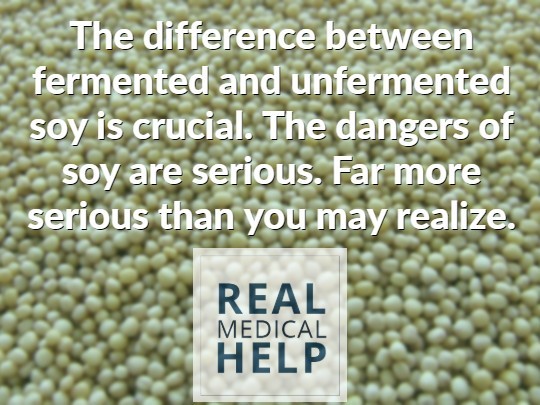 Have you looked at children and young adults recently? Do you notice how much faster they’re developing? Research proves that early onset puberty has increased in the last two decades. It is not surprising considering the massive bombardment of hormones children receive from birth.

The results are staggering.

Those phytoestrogens?  They’re not just in baby formula and they do a lot more than simply cause your kids to develop quicker.  Increased estrogen levels in the body lead to infertility, uterine fibroids, and breast cancer.  A separate study indicated that drinking just two glasses of soymilk a day can alter your menstrual cycle.4

Goitrogens in unfermented soy block synthesis of thyroid hormones, which can lead to hyperthyroidism and thyroid cancer.  They also interfere with iodine metabolism and have been linked to autoimmune thyroid disease.

What other surprises lurk in our soy lattes?

Every year, the numbers of allergic reactions to soy continues to grow.  Since soy is used as an additive and filler in so many processed and pre-packaged foods, manufacturers are required by law to list all soy used in production.

This allergy is so severe that a single bite of soy could literally be the last thing they ever eat.

Experts estimate that more than 90% of soy used in food manufacturing is genetically modified (GMO) – which adds another layer of risk to consuming soy.  The risks simply aren’t worth it when it comes to the dangers of soy.  Be healthy and make the safe choice.

1 Dr. Axe: What Is Tofu? 8 Reasons to Not Eat This ‘Healthy’ Vegan Product
2 National Institute of Environmental Health Sciences: Soy Infant Formula
3 Science Daily: Babies fed soy-based formula have changes in reproductive system tissues
4 Scientific American: Could Eating Too Much Soy Be Bad for You?

Dangers of Mineral Oil -Not Good For Your Skin

The Outstanding Benefits of Tai Chi at Any Age!

No matter your age, there’s an exercise that can fit smoothly into your life. If you haven’t considered adding the incredible benefits of tai chi to your daily routine, you absolutely should! It’s considered an exercise but it’s so much more than that!The History of Tai ChiThe concepts of this ancient art are found in Chinese history. The ...